Those of you who follow us on Facebook (and those of you who don’t, really should...) may recall that  we shared a post from a company called Belipola showing LRE staff collecting some magnificent sapling trees. The trees were destined for one of our flagship managed properties, Tekanda Estate, on the South Coast near Galle.

As with many of our managed properties our involvement started when we were the sales agent for the land which at the time of purchase was a rundown duo-crop plantation of tea and coconut palms. The location however was, and is, spectacular, commanding a hilltop position with panoramic views towards the coast a few kilometres hence.

From the outset the project was designed to be as sustainable as possible. Everything from the implementation of solar net metering to the use of locally sourced materials for construction. The end result is an imposing grass-roofed villa with a game lodge feel, hand crafted by local artisans  – thatchers, carpenters, furniture makers – from sustainably produced wood and other eco materials.  Not a single splinter from illegally felled jungle trees was used.

The villa itself was completed in 2020. The work on the extensive grounds continues with LRE again taking the lead on the design, development and ongoing management. Which brings us back to Belipola.

High in the hills near Haputale, Belipola Arboretum was created on a neglected 20 acre tea estate and is the world’s first “Analog Forest”. With a mission that encompasses, conservation, research and education they also supply organic saplings for replanting. As well as the latest shipment for Tekanda, Belipola trees can be found at several other LRE projects including The Haldummulla and Park Estates. 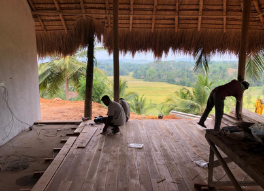 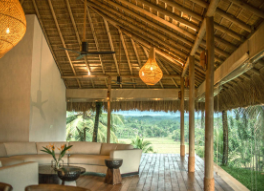 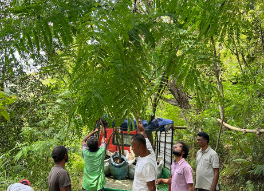